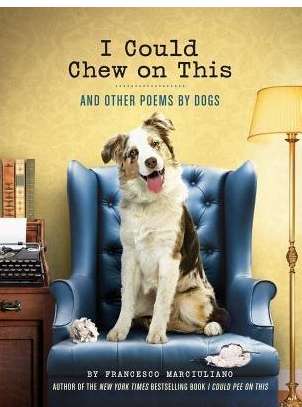 'I Could Chew On This' Features Poems from Everyone's Furry Friends

Amanda Greer — August 6, 2013 — Pop Culture
References: chroniclebooks & fancy
'I Could Chew On This' is the exciting new installment from New York Times Best Selling Author Francesco Marciuliano. Released as a follow-up to his first collection of poems titled 'I Could Pee On This, and Other Poems by Cats,' 'I Could Chew On This' features poems "written" by dogs. The result are some of the funniest and cleverest verses in contemporary popular poetry.

The titular poem 'I Could Chew On This' describes a dog's point of view as he wrestles with his urge to chew on everything around him. He loves the noise that things make when he bites into them (especially squeaks), and although it makes his owners mad, he can't stop -- it's an addiction.

This satirical take on a dog's easy, breezy existence makes for a fun-filled book that will make dog lovers smile from ear to ear.
4.1
Score
Popularity
Activity
Freshness