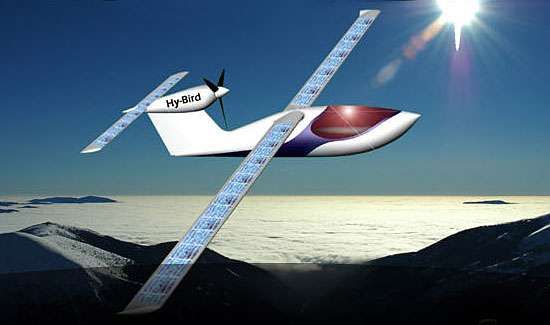 Wessley Murylo — May 2, 2008 — Eco
References: creatingexcellence.blogspot & lisa-airplanes
Share on Facebook Share on Twitter Share on LinkedIn Share on Pinterest
The Hy-Bird, a hydrogen-powered electric airplane that gets 10% of its power through solar-cells, is made of super-lightweight (and expensive) carbon fibre. The French company behind it, Lisa Airplanes, states that the power system will allow the plane to circumnavigate the globe in 3,000 km stages.

The combination of a rigid carbon wing and a flexible textile flap allows the craft to take-off and land in less than 330 feet, whilst ensuring the highest cruising speeds. When the textile is opened, the surface of the wing is increased by nearly 70% and a camber is created.

The future for leisure aviation will undoubtedly lead to a need for a reduction in noise and CO2 pollution. A plane with an optimized aerodynamic form is perfectly adapted for electrical propulsion.
The first plane, the â€œSpirit of Savoyâ€ will fly from ChambÃ©ry, France to New York, materializing the extensive research and development work of specialists in the fields of solar energy, fuel cells, lithium-ion polymer batteries and electrical conversion.

With the exception of solar energy, the other energy resources used, although clean and with an almost zero carbon footprint, are not renewable. They need hydrogen, at this moment, almost exclusively derived from natural gas, an energy source also doomed to run out soon, but as said it is clean, especially regarding greenhouse gases. The next step in the research program should be the replacement of hydrogen from natural gas by a clean energy from renewable resources.

Nevertheless, the scheduled flight this summer is a milestone. The Hy-Bird will become the first plane to fly around the world using only â€œgreenâ€ energies: solar energy and hydrogen. It will be a technological and ecological challenge, and last but not least, a human challenge.