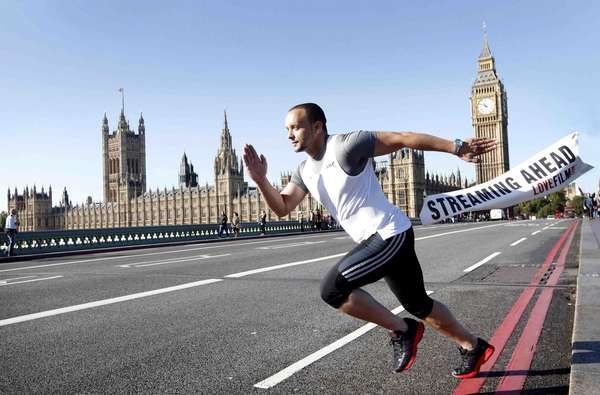 Olympic Medallist Jamie Baulch is a Human Advert for LOVEFiLM

The former team GB runner is using his long distance marathon training as a basis for the unusual marketing approach. He will be running over eight hours a day covering as much ground as possible, bringing the streaming message to film fans. Baulch will be running all day trailing branded banners behind him as the mobile human ad.

Baulch, 38, is going out from Oxford Street at 8am and hitting some of the capital’s busiest streets until the evening rush hour.

This is not the first unusual stunt for Baulch, who holds an Olympic silver medal for the 4x400m relay and took gold at the World Indoor Championships in 1999. Last year, he went head to head with a thoroughbred racehorse over 100 metres at Kempton Park before a delighted crowd – but lost by half a second.

Runners Racing Horses
The Jamie Baulch vs. Peopleton Brook Race Pits an Olympian Against an Equine