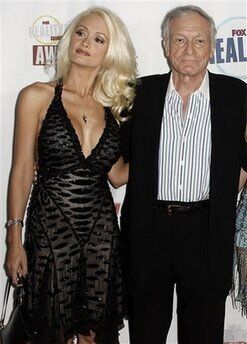 Hugh Hefner Gets the Boot from Holly Madison

Lindsey Erin Heim — October 10, 2008 — Celebs
References: people
Share on Facebook Share on Twitter Share on LinkedIn Share on Pinterest
The rumors from last month are officially true: Hugh Hefner and Holly Madison have broken up, and Hef is in shambles. After a 7-year relationship with the 28-year-old star, the 82-year-old Hefner sadly shares with People Mag, “If Holly says it’s over, I guess it’s over.” He then continues with, “She’s still here in the house,” and “Until a few days ago, we were sharing the same bed.”

Hugh Hefner believes that Holly Madison decided to split from him after having a discussion about six months ago concerning marriage and kids. Holly wanted these things from Hef, and when he told her he could not give them to her, she became very depressed and quickly packed her bags.

But don’t fret too much for Hef...he already has Holly Madison’s replacements lined up with 19-year old Playmate twins Kristina and Karissa Shannon. Hugh hopes these young’ins will come to his rescue and quickly cure his broken-heart blues.
6
Score
Popularity
Activity
Freshness
Access Advisory Services