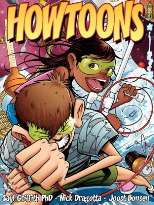 The superheroes are cartoon kids, Celine and Tucker, who set up a home workshop and build a whole series of toys and gadgets out of odds and ends.

The two geniuses are Paul Bonsen, program director of MIT's new Legatum Center for Development and Entrepreneurship, and writer and engineer, Saul Griffith, who earned his Ph.D. at MIT and won the MacArthur Foundation "genius" award this year.

"What we hope is that kids everywhere will not look at throwaway stuff the same way ever again," Bonsen said. "Instead, they will realize than an old plastic bottle can be a rocket or a submarine or any number of things."

Howtoons, published by HarperCollins, hit the bookshelves during the first week in December.