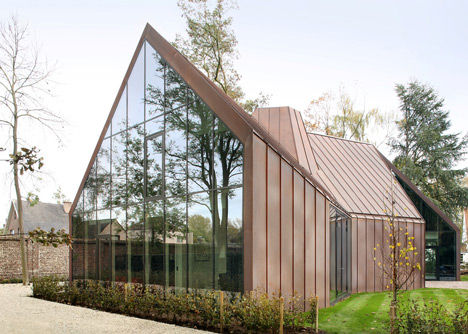 Tiffany — January 23, 2014 — Eco
References: graux-baeyens.be & dezeen
Belgian architecture and design firm Graux & Baeyens Architecten has recently built and designed a home called House VDV that features an exterior that has been clad with completely untreated untreated copper. The house is situated near Ghent in Destelbergen in the North-eastern part of Belgium. Inspired by impermanence, the Belgian design studio layered copper panels that allows for natural color tone changes and natural oxidization, from golden brown to turquoise.

The two story home has an irregular layout and is structured as three blocks placed at an angle from each other. The roof structure was inspired by traditional farmhouses around the area. "The typical rural pitched roof house is an archetype that has been really common in Belgium and the northern part of Europe for centuries, but strangely enough has never been seen as an modern way of building," explained the architect on the inspiration behind the roof.