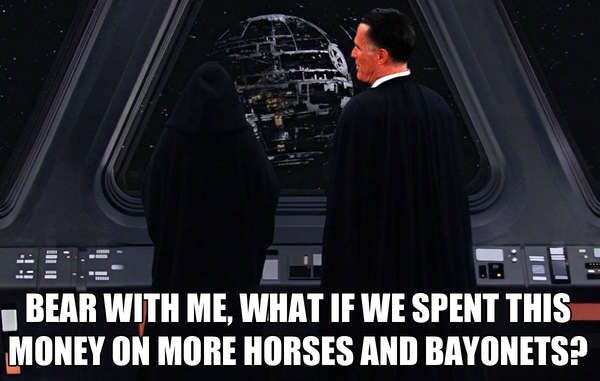 The zinger came from democrat candidate Barack Obama who deemed governor Romney's views on America's military spending archaic. As the Republican candidate criticized reduced navy funding, the president responded: “You mention the Navy, for example, and the fact that we have fewer ships than we did in 1916. Well Governor, we also have fewer horses and bayonets. We have these things called aircraft carriers and planes land on them."

The Horses and Bayonets blog takes on a comical approach to the President's rebuttal. With hilariously photoshopped images, this Tumblr page makes for an outstanding parody to the presidential debate's quips. Though political comical spoofs have always been prominent, the popularity of memes and social media involvement generated from the past three debates has been unprecedented. As lighthearted as this blog may seem, it is certainly stimulating conversation, as Internet involvement counteracts political apathy.
5.7
Score
Popularity
Activity
Freshness
Attend Future Festival