A mobile "home" for the homeless

The Urban Shell Shelter for the Homeless 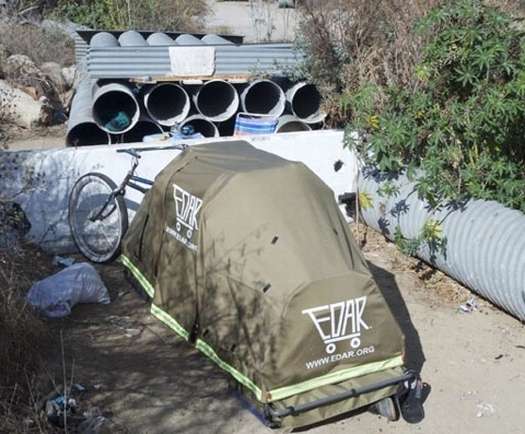 Each EDAR is a four-wheeled mobile unit which carries and transports belongings and facilitates recycling during the day. At night, the unit unfolds into a one-person framed tent-like sleeping enclosure complete with a bed.

The EDAR Project is the collaboration of Eric Lindeman, Jason Zasa and Peter Samuelson. Lindeman and Zasa are students at the Art Center College of Design, while Samuelson is a philanthropist/movie producer of ‘Revenge of the Nerds’ fame.

Former eBay President Jeff Skoll also donated start-up money to have a prototype built by shopping cart manufacturer Precision Wire in Commerce, California. After at least nine attempts, they produced the current version, and 60 units have so far been distributed in the Los Angeles area.
5
Score
Popularity
Activity
Freshness
Get Trend Hunter Dashboard