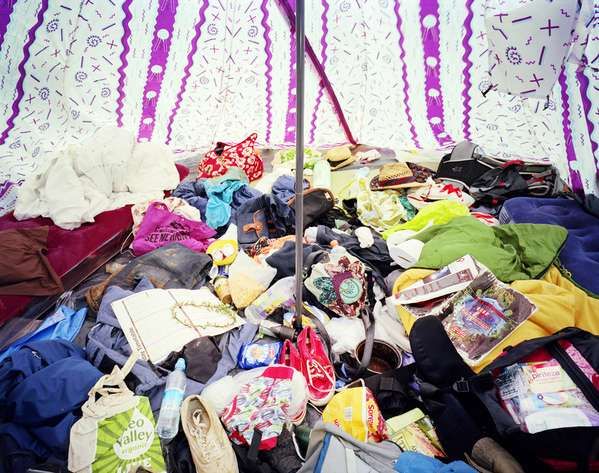 Emily Evans — August 22, 2011 — Fashion
References: jasperwhite & behance.net
Share on Facebook Share on Twitter Share on LinkedIn Share on Pinterest
Even if haven't seen the TLC Show 'Hoarding: Buried Alive', it doesn't take much background on the disorder to understand the similarities between the television show and these 'Home from Home' captures photographed by Jasper White. Under the artistic and creative direction of Gem Fletcher, these colorful captures show an oddly-tented world.

While each of these chaotic captures within the 'Home from Home' project showcase various tent living environments, they all follow a similarly vibrant and expressive pattern. I was instantly drawn to the 'Home from Home' captures based on their saturated colors, but quickly became even more enthralled when looking through this thought-provoking series.

Implications - Television programming continues to set many of the fads and interests that many modern consumers admit to having. As such, companies that track and predict future television and cinematic successes will be able to jump on the pop culture tidal wave that they inflict on society,
4.9
Score
Popularity
Activity
Freshness
Get Trend Hunter Dashboard