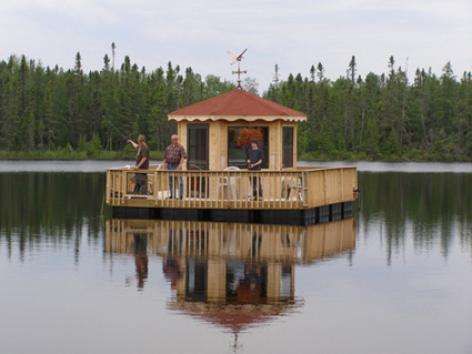 IdeaMan — February 22, 2008 — Unique
References: liveangler
Share on Facebook Share on Twitter Share on LinkedIn Share on Pinterest
Take the comforts of your backyard deck with you with this novel home-built version of a pontoon boat! According to the blog post, the builder was originally just going to build this gazebo on the edge of his dock, but, in his own words "I thought .....I might just as well build the deck with floats on it and I can then take it out fishing tooâ€.

It's the same old idea of building your own boat, but from a whole different perspective. If you have the skills to build a gazebo and a deck, I guess now you can build your own pontoon boat too! And in case the builder decides he wants to go out fishing alone, he included a remote-controlled trolling motor that is installed under the table in the gazebo, as well as a Lowrance Fish-Finder, and two electric winches with 40 lb anchors.