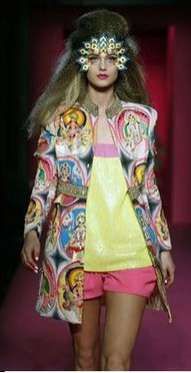 Designer Apparel and Accessories for the Ultimate Goddess Look

Wearing a Hindu god or goddess on your shirt alone might not be enough to be considered a religious act, but the goddess look is so popular and hot that it is worthy of being followed religiously. The gallery features a number of cool apparel and accessories, put together by Trend de la Creme, that are inspired by Hindu deities.