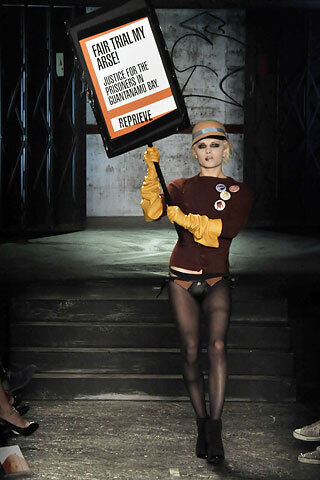 Part of the British designer's collection shown at London Fashion Week included a model in tattered black tights with what looked like a bikini bottom, a long sleeved tee with pin-on buttons and a pair of yellow gloves who was waving a sign that read, "Fair trial my arse!"

The rest of Westwood's collection had a full on heroin chic look. I say chic to be nice. The models looked like they were on death's door, like they had had a really rough night of partying and it is now 2 p.m. the next day, and they're still lurking around alleys in the streets of London looking for their next fix. They had bags under their eyes, viciously dark lips and skin so pale it was nearly blue, similar to skim milk in the right light.

"Fifteen years ago no one would have predicted such an incendiary nutcase would ever survive in business, let alone live to swish a wearable collection of in-demand Westwood-isms in the face of her gainsayers," Style.com said of the designer. "But that was what it was: a lineup of pinstripe tailoring, tartan kilts, knits, and coats with rounded lapels stamped with the baggy-hemmed, asymmetric hallmarks of the Westwood classic."
5.2
Score
Popularity
Activity
Freshness
Attend Future Festival