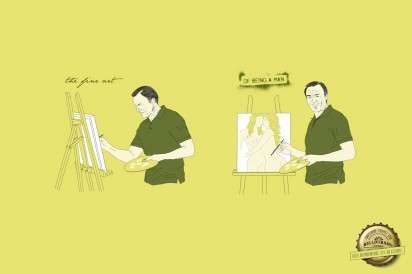 The Helldorado Beer Campaign Shows That the Drink is Handmade

Meghan Young — March 1, 2012 — Marketing
References: firestonebeer & ibelieveinadv
Share on Facebook Share on Twitter Share on LinkedIn Share on Pinterest
The Helldorado Beer Campaign hilariously depicts the "fine art of being a man," as stated in its tag line. A set of three minimalist posters, the ad campaign portrays this idea through the use of different scenarios. In each one, a man appears to be creating an artistic masterpiece, but not one that is traditionally expected. For instance, in place of a classic figure drawing portrait, a man has painted a sensual encounter between to females.

Conceived and executed by CCZ, an ad agency based in Curitiba, Crazil, the Helldorado Beer Campaign might make fun of what it means to be a man today, but it is lighthearted enough not to offend. Succinct and appropriate, the images highlight the fact that the beer itself is handmade.