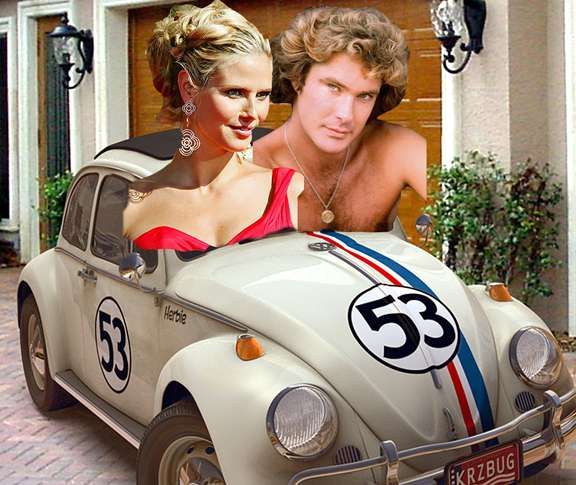 They've packed the "It's what the people want" ad campaign, which launches next month, full of famous German celebrities including Heidi Klum and David Hasselhoff. Could the 'Hoff be the secret weapon for brand revival VW has been missing?

In case their patriotic casting for the "people's car" doesn't spark interest for the rest of the world, they're also featuring a talking car. No, it's not Herbie; this time around, it's Max, a 1964 VW Beetle that comes to life.

In the ad, the aforementioned celebs will team with other Germans to tell the story, led by Max, of the Volkswagen brand's heritage.

"He can speak about anything having to do with Volkswagen, about products or offers," Richard Fisher, chairman of the VW National Dealer Council, says of Max.

The campaign will launch on April 7, 2008 and, in May, Max will introduce the Tiguan SUV to the US. Their hope is to revive the old spark of the brand as VW sales have dropped 32% in the America over the last 5 years.

They're hoping the ads will remind viewers of "the fun-to-drive idea that Volkswagen began with," a VW dealer said. "And Max will be the common thread for VW marketing going forward."

Could Heidi help boost the ads? She already stars in a VW ad with Seal for Tiguan in Europe, seen above. It's neat that she endorses German brands... a little known, yet random, fact is that she's also the spokeswoman for McDonalds in Germany!