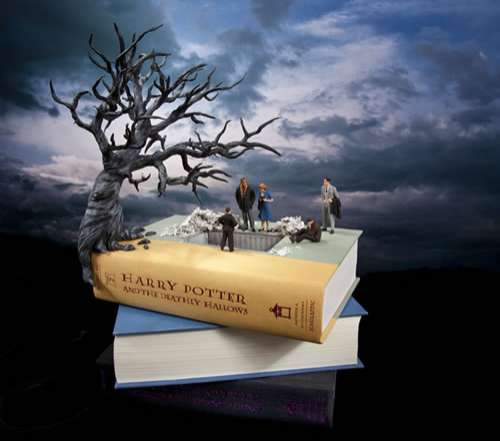 Meghan Young — July 19, 2011 — Pop Culture
References: lorinix.net & neatorama
The release of the final 'Harry Potter and the Deathly Hallow: Part 2' movie signals the end of an era, which Wired magazine wanted to capture with the Harry Potter diorama. A dark and sad mini model, it depicts the final farewell to this historical and iconic franchise.

Commissioned by the magazine, Lori Nix created the Harry Potter diorama. The essential idea was to create a funeral scene on top of a stack of 'Harry Potter' books, one of which was dug out to act as the grave. Surrounding the grave are miniature figures as well as a looming tree made of wires. Although there is an eerie air to the Harry Potter diorama, it does capture the sadness the fans feel for the end of this epic story.
3.3
Score
Popularity
Activity
Freshness