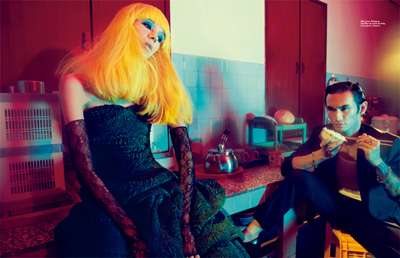 Marriska Fernandes — October 27, 2011 — Fashion
References: gtgan & designscene.net
It’s the season of love according to the Harper’s Bazaar Singapore November 2011 issue. The shoot gets the party swinging as model Inna P flirts her way into the arms of a male model.

Captured by photographer Gan, the November issue is titled 'In The Mood For Love,' as the barbie-lookalike poses seductively in a restaurant setting. In smouldered eye shadow and elegant couture, Inna poses flirtatiously in this lovey-dovey issue.

With fashion direction by Kenneth Goh, the shoot highlights the extremely bright yellow-haired model and her extravagant dresses. The issue has the same old glam theme, but spiced up by the love scene. This shoot sure has viewers hoping for a juicy feature. If you are one of them, the Harper’s Bazaar Singapore November 2011 editorial is the perfect fit.
4.7
Score
Popularity
Activity
Freshness