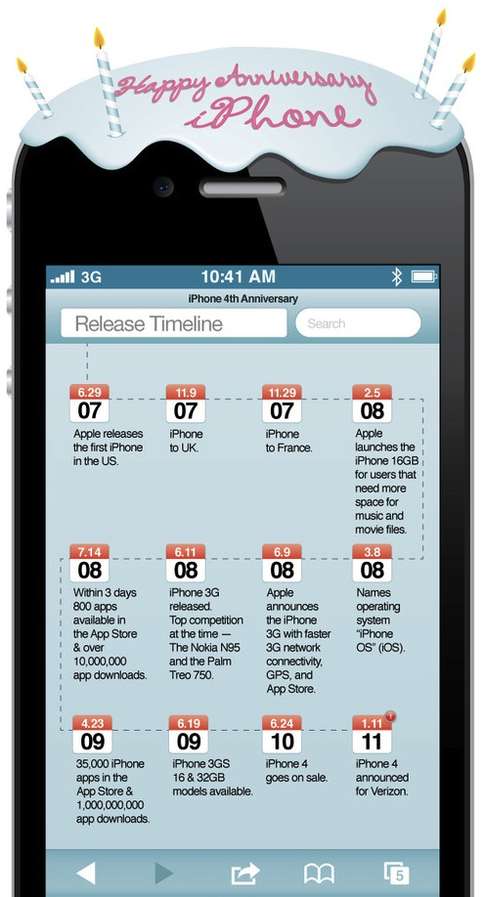 Corinne Guirgis — July 1, 2011 — Tech
References: mashable & holykaw.alltop
Share on Facebook Share on Twitter Share on LinkedIn Share on Pinterest
The inception of the iPhone forever changed the face of portable communication. Since its release, Apple has virtually dominated the cellphone market with its super-capable smartphone and its regular expansion is continuous. It was four years ago today that the world saw the release of the so-called "Jesus Phone" that literally does everything.

Mashable explains the influence of the the iPhone: "When we look at the mobile industry, there is a very clear line between what happened before June 29, 2007, and what happened after. I would argue that every major smartphone that has gone into production since the iPhone’s release has, in some way, been a response to the iPhone itself." The iPhone infographic shows that Apple’s stock has nearly tripled over the past four years. The company market cap exceeds that of Microsoft and their revenues are now higher than Microsoft’s -- which was unfathomable just four years ago.

Implications - The release and continued expansion of the Apple iPhone saw an incredible response from consumers in the mobile industry. Cellular devices are no longer for simple communication, but for mapping, cooking, web browsing and virtually anything else fun or functional.
4.2
Score
Popularity
Activity
Freshness
Get the 2021 Trend Report FREE