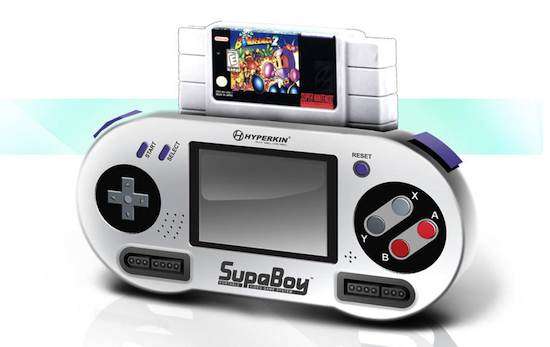 Jason Soy — April 15, 2011 — Tech
References: hyperkin & ca.gizmodo
If you're a fan of retro gaming and have shelves of Super Nintendo video game cartridges lying around, you can now play all your old favorites on the go with your own handheld Super Nintendo.

Shaped like the classic SNES game controller, Hyperkin's Supaboy creation features a 3.5-inch LCD screen, weighs 11.2 ounces, and plays up to 5.5 hours on a single battery charge. If the novelty of owning a handheld Super Nintendo isn't selling it enough for you, the Supaboy also works with television sets and features two controller ports for your original SNES controllers. The most impressive feature of the Supaboy is that it plays both Japanese and North American SNES cartridges! Importers rejoice.