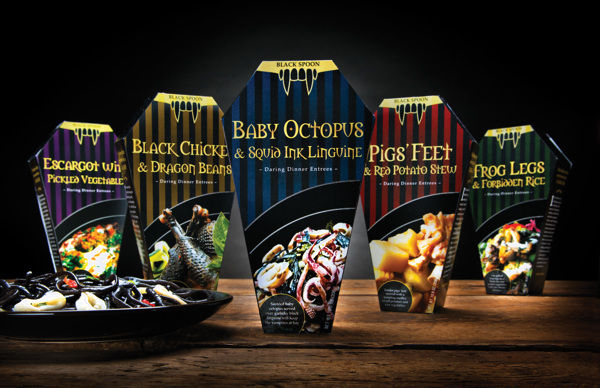 Laura McQuarrie — October 21, 2014 — Lifestyle
References: behance.net & behance.net
This creepy series of Halloween food packaging by Gina Moyer targets an audience with a taste for the darker side of life. The six frozen Black Spoon Daring Dinner Entrees include eats like escargots, chicken, octopus, pig feet and frog legs, appealing to those with adventurous appetites. Each of the products is presented with a name and a picture that makes it seem a little squirm-worthy.

To make each of the "daring dinners" stand out even more in the frozen food section, each of the meals is contained in a creepy coffin-shaped box, to really make it known that what you are about to eat will be a little different from the other foods you normally find in the grocery store's frozen aisle.
5.3
Score
Popularity
Activity
Freshness