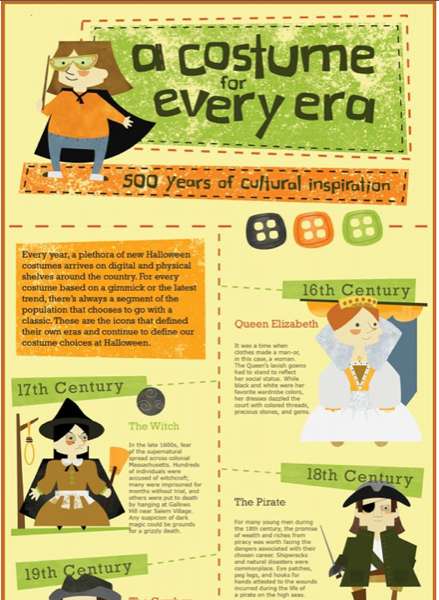 Susan Keefe — October 18, 2011 — Pop Culture
References: blog.halloweenexpress & holykaw.alltop
Share on Facebook Share on Twitter Share on LinkedIn Share on Pinterest
If you're still struggling with Halloween costume ideas, this infographic from Halloween Express will give you 500 years of cultural costume inspiration. Starting with the 16th century, this infographic walks you through a series of costumes designed to emulate a specific era. The 17th century is characterized by a witch to pay homage to the Salem witch trials. The 1950s are predictably emulated by a greaser and his poodle skirt-wearing lady friend.

Hilariously, this infographic does include this very young decade. According to Halloween Express, this 2 year-old era has been deeply impacted by an iPhone App. Yes, according to this graphic, the most influential thing to come out of the 2010s thus far has been Angry Birds. There is just no two way about it, things have definitely changed.

So, skip the spooky outfit this year and dress to the nines as a plush giant cartoon bird. It's what all the cool kids are doing!
2.6
Score
Popularity
Activity
Freshness
Access Advisory Services