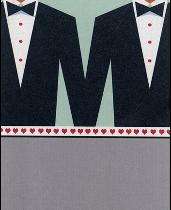 Hallmark recognizes what most U.S. States don'’t:– same-sex marriage is important to a lot of people. As one of the country's leading greeting card companies, Hallmark is keeping one step ahead of the competition by rolling out same-sex wedding cards, including one that has two tuxedos (pictured), overlapping hearts, and intertwined flowers. They use generic wording inside such as "Two hearts, One promise."

"It's our goal to be as relevant as possible to as many people as we can," Hallmark spokeswoman Sarah Gronberg Kolell said.

The Williams Institute at the UCLA School of Law estimates that 120,000 same-sex couples will marry in the State of California alone during the next three years. Keeping up with marriage trends means millions of potential dollars for industry businesses such as Hallmark.
2.9
Score
Popularity
Activity
Freshness
View Innovation Webinars