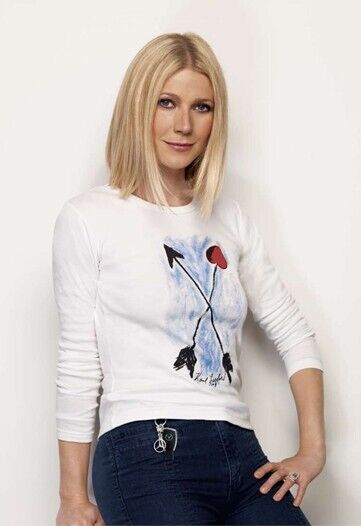 Gwyneth Paltrow for Key to The Cure

â€œIf there is anything I can do to help raise money, especially with a charity like this, I will,â€ Paltrow told WWD. â€œI read about the charity and how aggressively they are trying to find a cure, not only for women's cancers but also for other cancers. They target a lot of different areas out there. They support people who are coming up with innovative ideas to cure cancer. It's an issue that touched me in a lot of ways.â€

Paltrow says of this year's special T-shirt which was designed by Karl Lagerfeld, â€œIt looks like somebody drew on the shirt, and it's sweet and cool at the same time. It looks quite homemade, which I really like.â€

Gwyneth lost her father, Bruce Paltrow, to the disease in 2002, so it's a charity she is passionate about. The initiative will donate money to the Bruce Paltrow Oral Cancer Fund.

Check out the gallery below for pictures of Gwyneth modeling the new t-shirt, plus previous celebrity faces for the initiative.
3.3
Score
Popularity
Activity
Freshness
View Innovation Webinars