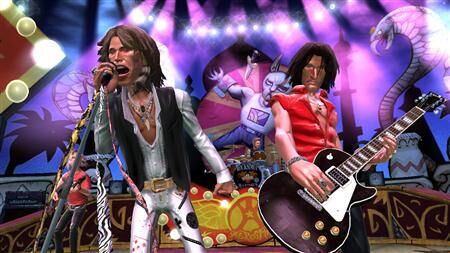 Bianca — February 15, 2008 — Tech
References: uk.reuters
Share on Facebook Share on Twitter Share on LinkedIn Share on Pinterest
It seems there are more and more Guitar Hero and Rock Band addicts by the day. To ensure players don't get bored of engaging with the virtual instruments, Activision Inc has added yet another new game, Guitar Hero: Aerosmith. It's sure to be a hit among gaming addicts who Don't Want To Miss A Thing.

The game will allow owners of Xbox 360, PlayStation 3, Wii, and PlayStation 2 to become Steve Perry and Brad Whitford on guitar or Tom Hamilton on bass, if only virtually.

The game will have close to 30 Aerosmith songs and will also feature other bands who have opened for their shows in the past.

The game won't be released until this summer, but to get potential enthusiasts hooked early, Activision is releasing a free download of Dream On for Guitar Hero III users from February 16-18.

No other rock band has topped Aerosmith's sales of 66.5 million albums, making their popularity undeniable. The band is adored across several generations, so don't be surprised to find dad rocking out in the basement after Guitar Hero IV is released!

"The premise is that it's going to cover the 30-plus years of the band, from high school all the way through the rock superstardom of today," Kai Huang, head of Activision's RedOctane unit said.

"It's just a completely new way to interact with this music and with Aerosmith, and we think there's more opportunity to do that in the future."
3.7
Score
Popularity
Activity
Freshness
View Innovation Webinars