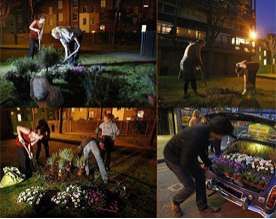 Their goal is to transform previously neglected public spaces into green havens for urbanites to enjoy. The movement has already caught on in cities like New York, Toronto and London.

Hard-to-reach spaces are accessed with the help of "seed bombs" which are contained inside empty egg shells. When thrown, they explode to release compost and seeds that hopefully blossom into stunning flowers.

If this sounds like sometime you want to start, you can let Richard Reynolds give you tips in his new book, On Guerrilla Gardening: A Handbook for Gardening Without Boundaries.

Adidas is using the buzz around Guerrilla Gardening for their own campaign to launch the GrÃ¼n collection, which included a photo contest where you can submit your own work in exchange for Adidas swag, a DIY video for seed bombs and the living billboard we previous featured: