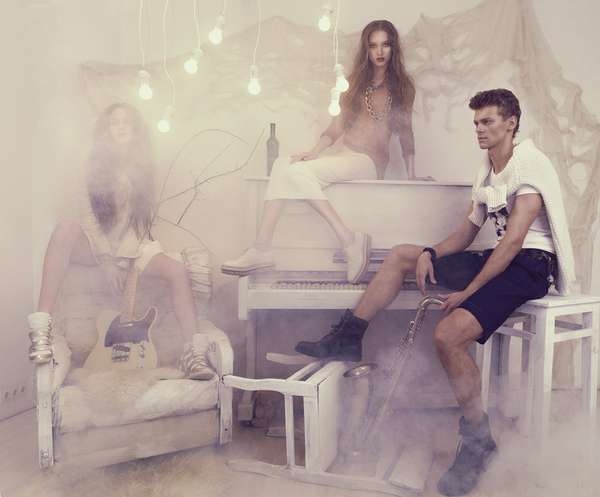 'Grunge' by Igor Oussenko is Filled With Sophisticated Attitude

Meghan Young — April 22, 2012 — Fashion
References: oussenko & fashionising
Share on Facebook Share on Twitter Share on LinkedIn Share on Pinterest
To pair the word 'polished' with 'punk' may seem unnatural to some at first, until they browse through the photo series titled 'Grunge' by Igor Oussenko. A Gothic photoshoot with an ethereal edge, it showcases some typical grunge pieces that have been given a slight tweak to make them more sophisticated. From colorful biker jackets and crisp trenchcoats to slim skirts and knit vests, the outfits are the best of two worlds.

Youthful and glamorous, the photo series Grunge by Igor Oussenko stars Elena Korobova alongside two other fellow models. Styled by Georgy Rushev and Oxana Pavlishina-Pomozova, the three models may look more put together than the average punk, but they maintain their attitude, which shows that it's often not the actual pieces that give clothing a specific style.
5.7
Score
Popularity
Activity
Freshness
Jeremy Gutsche Keynote Speaker