Google Strongly Involved With US Elections 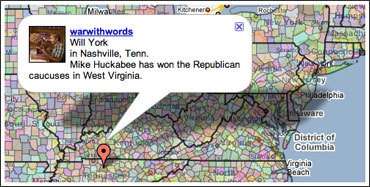 The latest action to track the progress of the elections during Super Tuesday was the junction between Twitter and Google Maps.

"Instead of sitting on the sidelines, you can send a simple text message about your voting experience," the official Google Blog explained. "Huge turnout? Taking too long in line? Did you just vote for the first time? We want it all, if you can keep to 140 characters or less."

Twitter updates on the Google Super Tuesday Map could be seen throughout the day.

Click here to view the results of the interesting mashup.

On Thursday, Google will be posting the highlights. The Google Super Tuesday Map is only one part of campaign. Google's also posting constant update on new YouChoose '08 videos, election headlines and primary state results.