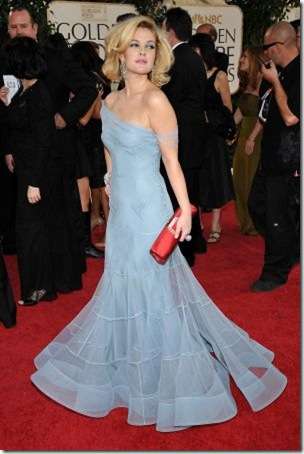 Golden Globes Fashions Sure to Inspire the Mainstream

Kindah Mardam Bey — January 12, 2009 — Pop Culture
References: anevibe & anevibe
Share on Facebook Share on Twitter Share on LinkedIn Share on Pinterest
The 2009 Golden Globe Awards were thrilling this year as actors and actresses came out with some of the most stunning outfit choices we have seen in years. Fashion trends for women were classic black dresses (usually with a satin texture), golden dresses with vertical lines, a few soft and flowing vanilla coloured dresses and a couple of stunning red numbers, and all were strapless! Red lipstick was the la bouche enhancer of the day, and either oversized earrings or ornate necklaces with brightly coloured clutch evening bags dominated the accessory department.

Beyonce looked like a goddess in one of this year’s biggest trends: a gold gown accentuated with streaming vertical lines; also rocking this look were Penelope Cruz and Demi Moore. A twist on the gold dress was seen on Megan Fox who wore gold but went for a muted print that made her glow like the Golden Globe statues themselves. Some actresses went for a more subtle, neutral look that Ryan Seacrest coined “Vanilla,” which were best seen on Sandra Bullock, Kate Beckinsale and Salma Hayek. Drew Barrymore went for a Dior gray gown, but had the best clutch in burgundy that both matched the trend and complimented her outfit perfectly.

Rich dark tones were also popular; Anne Hathaway was seen in a beautiful midnight blue dress with sequin detailing and Kate Winslet looked dynamite in a black dress with a satin look and straight lines. Paired with the darker ensembles were little to no necklaces and vibrant red lips, making Anne Hathaway and Kate Winslet look polished and elegant.

For those who did wear necklaces or heavy baubles, the effect was shimmering; Beyonce wore an ornate filigree necklace and Amy Adams had a dynamic pair of earrings that looked like two vibrant emerald leaves outlined in gold and connected together for each ear.

Not to be forgot, the men did an outstanding job of looking deliciously debonair this year. Popular looks were white shirts, covered by black blazers with small amounts of muted detailing on the lapels and either skinny ties or bow ties. Such actors as Leonardo DiCaprio, Jeremy Piven, David Duchovny, Patrick Dempsey, Zac Efron and Zachary Quinto looked fashionable in skinny ties, whereas Brad Pitt, P-Diddy and Jake Gyllenhall sported the dickie bow. Another fashion emerging was the grey or silver tie, which was seen on Rainn Wilson, Robert Downey Jr, and Kiefer Sutherland.

- Accentuated hips! The women were all about hip hugging outfits that revealed tiny frames on top and accentuated the swagger of those womanly hips. (Anna Paquin, Beyonce, Salma Hayek)