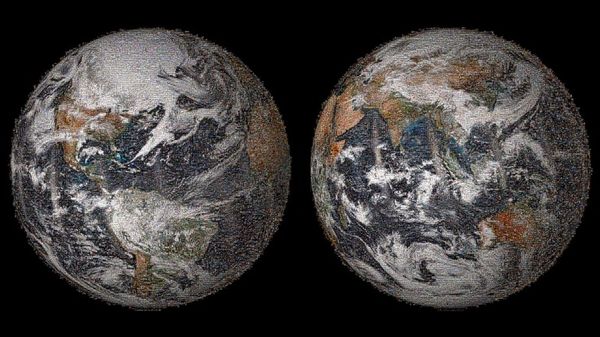 NASA's 'Global Selfie' Comprises 36,000 Selfies from Around the World

Rahul Kalvapalle — May 23, 2014 — Tech
References: nasa.gov & gizmag
Share on Facebook Share on Twitter Share on LinkedIn Share on Pinterest
NASA has put together a beautiful photo-mosaic dubbed 'Global Selfie,' which consists of over 36,000 photographs taken around the world on Earth Day 2014. Over 50,000 photos were submitted and 36,422 selected to create a 3.2-megapixel image which viewers can zoom into to view the individual photos.

NASA invited people around the world to go outside on Earth Day, take a selfie and share it on social media using the tag #globalselfie. Photos were submitted by people from 113 countries and every single continent, including Antarctica. The individual images in the mosaic are not necessarily placed in their geographic location of origin. as this would have caused large swathes of the planet to appear blank.

The aim of the Global Selfie campaign was to promote environmental awareness and highlight NASA's efforts to protect the planet.