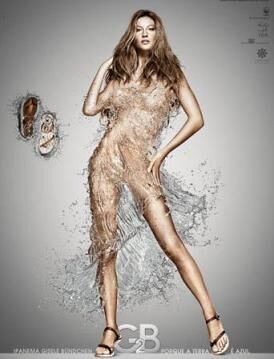 Glamboulevard — September 18, 2007 — Fashion
References: glamboulevard & glamboulevard
Share on Facebook Share on Twitter Share on LinkedIn Share on Pinterest
The highest paid supermodel strikes again with her new campaign promoting her own line of sandals. The Brazilian supermodel appears in the Porque a Terra Ã© Azul campaign wearing nothing but a water dress. The Brazilian supermodel teamed up with shoes company Grendene to create the Ipanema Gisele Bundchen line. The world's richest supermodel which is also on Forbes's list of the most powerful celebrities of 2007 due to the success of her popular shoe line that has flip-flops selling for as much as $230 a pair. Click here for more pictures and behind-the-scenes footage.