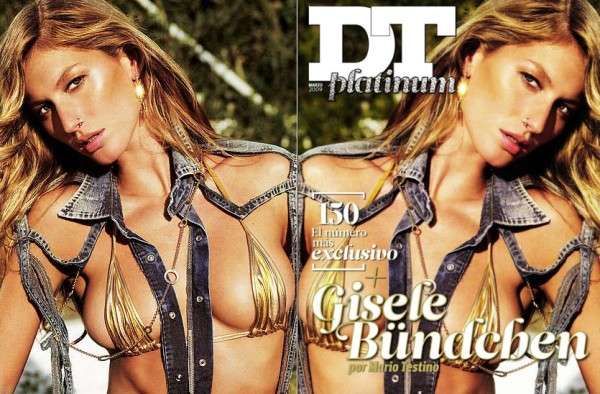 Ayman — February 28, 2009 — Pop Culture
References: trendhunter
Share on Facebook Share on Twitter Share on LinkedIn Share on Pinterest
As we reported earlier, Gisele Bundchen is on the new cover of Spanish magazine DT Platinum. But it turns out that the cover shot is a recycled image of Gisele Bundchen from an editorial that ran in V Magazine almost a year ago.

In addition to the constant news of downsizing, this recycling of the Gisele Bundchen image is further proof that the recession and global economy crisis is taking its toll pretty hard on print publications.

While no one can argue that Gisele Bundchen looks extremely hot on DT Platinum, the fact that the recycled image is chosen for the cover and not just an editorial inside the issue highlights the economical trouble that the magazine industry in facing.

After all, a magazine cover is the most defining attribute of an issue. Choosing an old image from a different magazine is a strong indicator that the magazine is running out of creativity and resources.

For its part, DT Magazine tried to spice things up by giving the Gisele Bundchen image the horizontal flip treatment in order to give it a bit of a fresh makeover.

The used image was taken by Mario Testino and styled by Nicola Formichetti. Check out some of the images of that editorial in the gallery and the full V Magazine spread below.
4.8
Score
Popularity
Activity
Freshness
Jeremy Gutsche Keynote Speaker