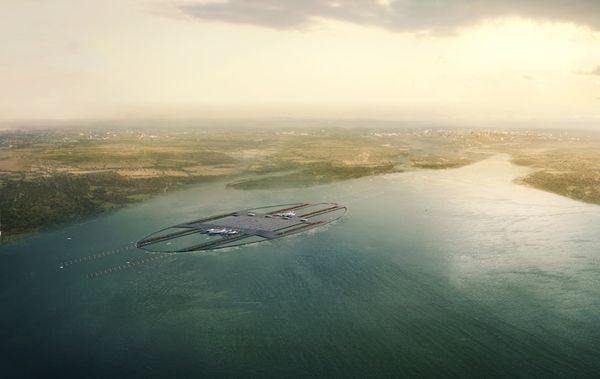 The London Britannia Airport is a Floating Island of Technology

Tiffany — November 21, 2013 — Tech
References: testrad & cnn
Share on Facebook Share on Twitter Share on LinkedIn Share on Pinterest
Thames Estuary Research and Development Company (TESTRAD) and global architecture design and planning firm Gensler has proposed a futuristic concept of a potential airport in London called the London Britannia Airport. This revolutionary concept stems from the need to evade problems that other land-based establishments encounter, such as noise pollution and the need for more space. As Testrad states on CNN, "with Heathrow running at 99% capacity, the capital needs more runways." The solution is found in this airport.

The futuristic airport will be situated on an artificial island approximately 80 kilometers from downtown London. It will have 6 runways, allowing three or more aircrafts to fly at the "same time, 24 hours a day in all weather conditions." The airport will also alleviate Londoner's complaints of noise pollution as planes land and depart on a daily basis.

The airport will be a perfect balance between environment and the future. The concourse and passenger areas will have plenty of greenery and above, outside the arcs would be a simple oval structure with runways at the top. The London Britannia Airport will be situated in the Thames River.
2.9
Score
Popularity
Activity
Freshness
Jeremy Gutsche Keynote Speaker