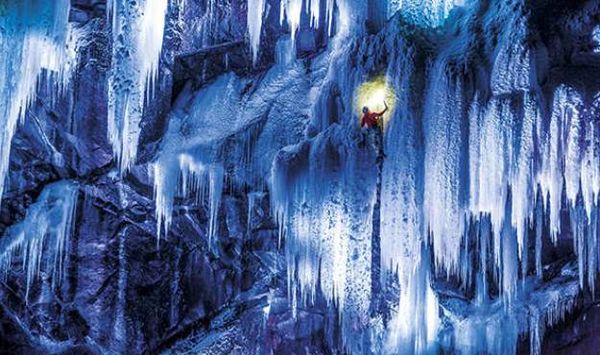 Tiffany — November 26, 2013 — Pop Culture
References: mammut.ch & sommetsports.co.nz
German-born alpine photographer Thomas Senf has collaborated with Swiss-based light artist David Hediger, along with a team of expert Mammut ice climbers headed to Eidfjord, Norway; a region that has been recently known as one of the best ice-climbing areas in the world, composed of the world’s largest concentration of frozen waterfalls.

Senf’s vision was to photograph professional ice climbers against the backdrop of the icefalls, using flares and spotlights to produce some of the world’s most unique and dramatic photographs -- all while filming at night. By the use of colored flares, headlamps and spotlights, Senf’s photographs capture the magical, electrifying atmosphere.

The result? “The colors, reflective ice and moving shadows created images that appear to be from another world, the world of myth and legend,” according to Mammut.