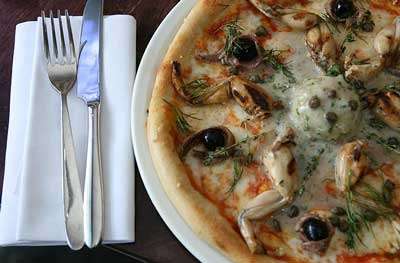 Pearl — October 18, 2008 — Eco
References: mirror
Share on Facebook Share on Twitter Share on LinkedIn Share on Pinterest
Jumping amphibians! The humble pizza has leaped from being everyone’s favorite delivery meal to being exotic fare with the introduction of pizza topped with frog legs. The Hopper (£17.95 or $36) comes with 8 legs, capers and anchovy sorbet on a traditional tomato and cheese base. It’s the brainchild of chef Sami Wasif from the London Eco chain whose creation, not surprisingly, was inspired after a trip to France.

Wasif says, “I’ve been making pizza for more than 20 years and know that London is a city always looking for something new.” He seems to think the Hopper is a refined dish because you have to eat carefully with your hands and will need a finger bowl. He is so pleased that he is thinking of snails to top his next culinary creation.

The Hopper has stirred up controversy and anger from animal rights campaigners, however, because the trade in frog legs involves the amputation of the limbs while the frogs are still alive--leaving the frogs to die limbless. Another concern is the effects on the ecosystem that eating frog legs might cause, since frogs keep the insect population in check.
2.1
Score
Popularity
Activity
Freshness
Attend Future Festival