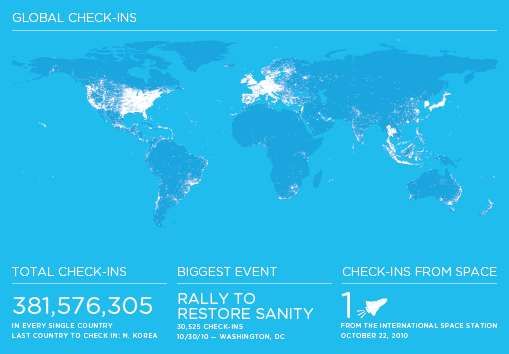 Renee Ramsarran — January 25, 2011 — Pop Culture
References: blog.foursquare & holykaw.alltop
Share on Facebook Share on Twitter Share on LinkedIn Share on Pinterest
The Foursquare infographic shows an impressive 2010, boasting a 3,400% growth for the social network. The location-based website published this fascinating infographic to visually depicts its success. This illustration also comes with the announcement that they have now hit more than 6 million registered users. The graphs presents some staggering figures for the company, like its 381,576,305 worldwide check-ins last year, plus its first one from outer space.

Some other fun facts include restaurants topping in popularity in the check-in category, whereas campuses were found the least popular. Even if you aren’t an ardent Foursquare user, I would suggest browsing this fascinating Foursquare infographic.
5.3
Score
Popularity
Activity
Freshness
Attend Future Festival