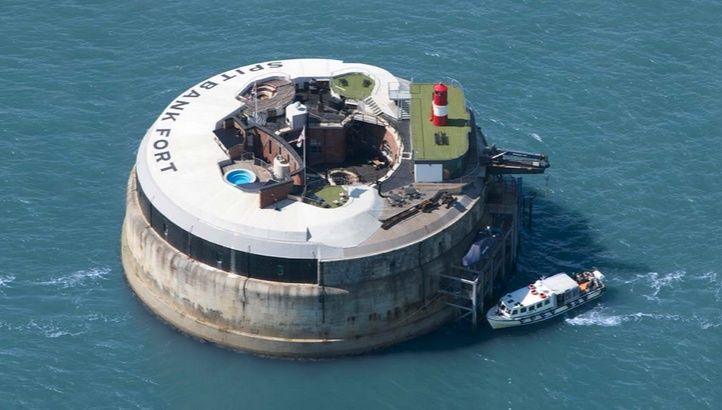 Robin S Joseph — March 9, 2015 — World
References: amazingvenues & thebrigade
Share on Facebook Share on Twitter Share on LinkedIn Share on Pinterest
Spit Bank Fort Hotel -- or what was originally known as Spit Bank Fort -- is a British naval defense fort that turned luxury resort in the middle of the sea! The original structure was commissioned in 1859 by the United Kingdom as part of a program to step up the homeland's naval defenses against a possible French invasion. The British government later got tired of maintaining it and sold it off in 1982.

After passing through several hands it is now owned by 'AmaZing Ventures,' an English hotel firm that specializes in converting historic landmarks into hotels and resorts. Off the coast of Portsmouth Harbour in England, it may look like a prison from the movie Shutter island from afar. After all, it's an English fort, but the new owners have really turned the place around into a luxury hotel complete with a sauna, water sports, a wine cellar and similar luxury hotel experiences.
6.3
Score
Popularity
Activity
Freshness
Get Better and Faster