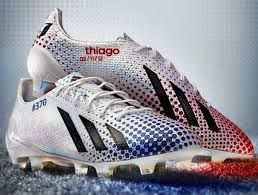 Each pair of this flashy football footwear features the goals uniquely marked 1-371, and a different design as a custom motif nods to the percentage of goals he's scored in every such way; headers, lefty, righty -- anything this football visionary and magician can do.

The boot also features the name and date of birth of Messi's first-born son, Thiago. Encompassing a vibrant colorway and the look and feel of the remarkable legacy and legend himself, the Adidas Adizero F50 "371" cleat is a timelessly valuable possession that any football enthusiast would dream of owning.
3.3
Score
Popularity
Activity
Freshness
View Innovation Webinars