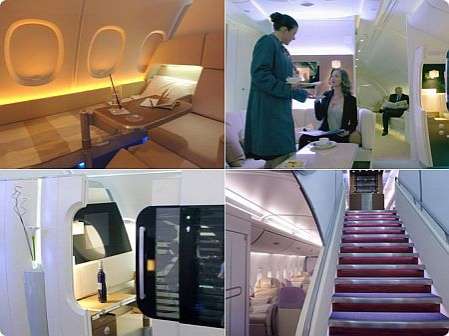 OK, fine, so the Saudi billionaire didn't buying an actual floating castle in the clouds, but he has invested in a "VVIP version" of a double-decker Airbus A380. The "Saudi Arabian Warren Buffett" signed on the dotted line at the Dubai air show making him the first person to buy the world's largest passenger plane for personal use. At $319 million, its packed with ever luxury a prince could ask for, from jacuzzis to a games room.

Interior design plans haven't been finalized, but the Telegraph reported rumors of a chic Middle Eastern theme including "a lounge with curtains to mimic tents of the Arabian desert and a fibre-optic mosaic that will depict a shifting desert scene."