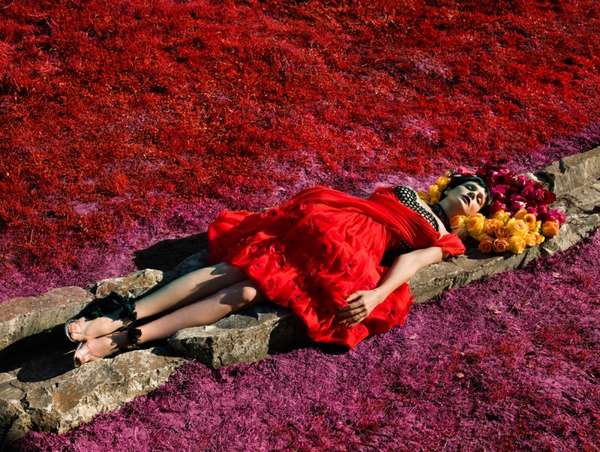 Meghan Young — May 6, 2013 — Fashion
References: flaunt & fashiongonerogue
Share on Facebook Share on Twitter Share on LinkedIn Share on Pinterest
Appropriately titled 'Fabrication,' the Flaunt Magazine Issue 127 edition is covered by actress Carey Mulligan. The much-talked about celebrity, who stars in the soon-to-released movie 'The Great Gatsby,' takes on a very high fashion look, which contrasts greatly with her usual girl-next-store take on beauty and style. Considering that the theme is fabrication, her adoption of a different persona shouldn't be surprising.

Shot by photography duo Stevie and Mada, the Flaunt Magazine Issue 127 editorial is also accompanied by an experimental profile of the actress as told by a fictional childhood friend. Perhaps this friend saw her as a spiritual and stylish creature, a couple of traits that stylist Elizabeth Stewart concentrated on. Draping her in designs from the likes of Valentino, Dolce & Gabbana and Alexander McQueen, Stewart put together a visionary wardrobe.
6
Score
Popularity
Activity
Freshness
View Innovation Webinars