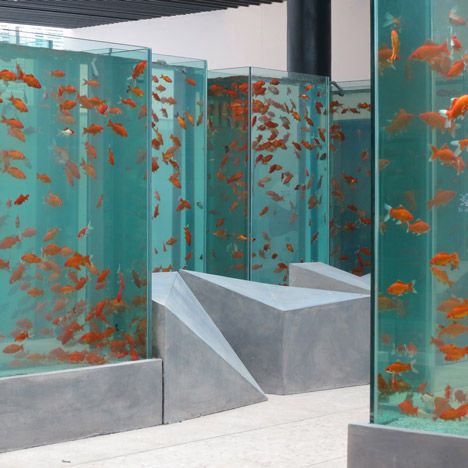 This Gallery Has Fish Aquarium Replicas of a Skyscraper Development

Lacey-Jane Walsh — October 4, 2013 — Art & Design
References: lindle-bukor.net & dezeen
Share on Facebook Share on Twitter Share on LinkedIn Share on Pinterest
This remarkable gallery is located next to a construction zone, and features fish aquariums modeled after the skyscrapers that are being built next door. Lu Yang, Christian Lindle and Raoul Bukor are behind this fantastic fish tank exhibit, entitled 'Fishpond City.'

Fishpond City is currently home to more than a thousand goldfish. This is meant to represent the amount of people who will be living in the high-rises once construction is completed. As if that weren't clever enough, the designers chose goldfish because they are a Chinese symbol for luck, prosperity and fertility. This pretty clearly indicates that hopes are high for the success of this underway development.

The tanks are also surrounded by glass boxes which contain colored LED lights. On the east side of the gallery, the lights glow orange to represent the coming of dawn. At noon they fade, and eventually give off a red glow for dusk. This stunning fish city exhibit mimics urban life in an interesting way.
3.7
Score
Popularity
Activity
Freshness
Jeremy Gutsche Keynote Speaker