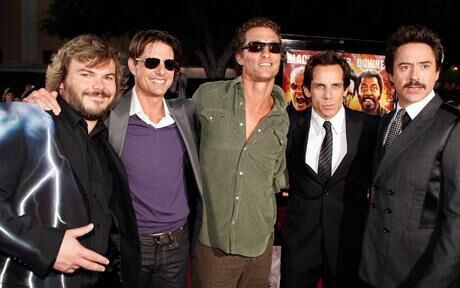 Ayman — September 22, 2008 — Marketing
References: teamrubber
Share on Facebook Share on Twitter Share on LinkedIn Share on Pinterest
The recent Hollywood movie ‘Tropic Thunder’ starring Ben Stiller, Robert Downey Jr., Jack Black and a much hyped cameo by Tom Cruise, has more than six features on Trend Hunter. Many of these articles were written way before the release of the movie, so you know there must be something extra special about it.

Adam at We Are Team Rubber recently wrote an insightful article that explains the genius behind this movie’s marketing and how it ushers us into the era of Film 2.0.

The 2.0 is a reference to the days of Web 1.0, nearly ten years ago, when ‘The Blair Witch Project’ utilized an unusual word-of-mouth viral marketing technique to turn a rather low-budget independent film into a $248 blockbuster.

However, the novelty of these 1.0 techniques, such as internet forums, mailing lists, trailer sites, and newsgroups has worn off and become standard. Almost every new movie has its own Myspace page, YouTube account, blog and multimedia site.

So what sets Tropic Thunder’s marketing apart from the rest?

Tropic Thunder’s multi-layered viral marketing was not an afterthought to promote the movie after it was finished. Rather, it was an integral part of the movie making process. It had a big effect on the plot, characters, actors and concept.

For example, since Tropic Thunder is about a group of actors making a Vietnam War film (a movie within a movie), each ‘movie star’ character had his own micro-site and fictitious film trailers. For example, Tugg Speedman (Ben Stiller’s character) was named as a Panda Celebrity in a cross promotion and awareness effort.

Then there was the “Rain of Maddness” mockumentary which spoofed the movie before its release. And who could forget how the “Bold Fat Tom Cruise” cameo set the blogosphere on fire and garnered the movie a huge amount of buzz and awareness?

These are just a few of the creative marketing examples. See more in the related trends below and check out Adam’s article for an in depth study of the genius of Tropic Thunder marketing.
1.8
Score
Popularity
Activity
Freshness
Attend Future Festival Virtual