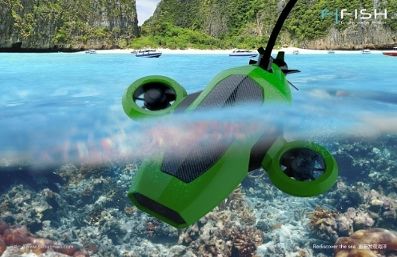 The 'FiFish Atlantis' Recently Made Its Debut at CES 2016

Katherine Pendrill — January 6, 2016 — Tech
References: taihuoniao & prnewswire
Share on Facebook Share on Twitter Share on LinkedIn Share on Pinterest
'FiFish Atlantis' is a mass-market underwater vehicle that just made its debut at CES 2016. Smart ROVs (Remotely Operated underwater Vehicles) are nothing new, however they have long been absent from the consumer market. Now a Chinese company has developed a smart ROV that is specially designed for consumer use.

'FiFish Atlantis' was designed by 'Taihuoniao Shenzhen D3IN Future Labs,' which is a subsidiary of the Chinese hardware incubating platform 'Taihuoniao.' Unlike ROVs that are manufactured for industrial use, FiFish Atlantis boasts user-friendly controls that make the device extremely easy to operate. The device is equipped with a waterproof video camera, remote-control operation and a battery that can last up to 2 hours at a time. In addition, the smart ROV is modular, meaning users can extend the function of the device simply by adding additional accessories.

The device provides a mass market alternative for consumers who are interested in using ROV technology to explore the ocean floor.
6
Score
Popularity
Activity
Freshness
Get the 2021 Trend Report FREE