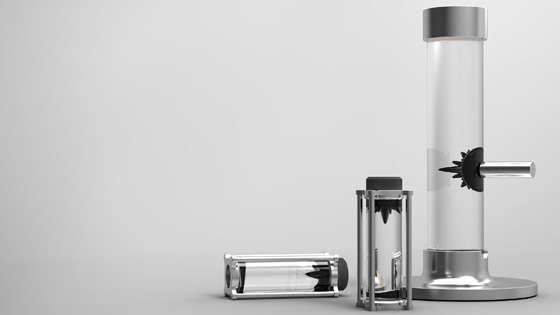 Ferrite by David Markus is an Interactive Art Piece

Meghan Young — December 22, 2011 — Tech
References: kickstarter & dvice
Share on Facebook Share on Twitter Share on LinkedIn Share on Pinterest
The stunning sculpture titled Ferrite by David Markus may look like a modern water bottle, but that dark mass that appears part of the design is actually inside of the vessel, thus making the liquid undrinkable. That black puddle is known as ferrofluid, which is a magnetic liquid that forms into artistic and alienesque shapes.

Created purely for an aesthetic purpose, the sculpture Ferrite by David Markus reacts to magnets that are included with the piece. Made out of aluminum and specially coated superhydrophillic glass, it would make a great gift for a person who loves art, science or futuristic items.

Currently on Kickstarter, Ferrite by David Markus hopes to raise a goal of $30,000 by the end of January.
3.9
Score
Popularity
Activity
Freshness
Get Better and Faster

Mesmerizing Magnetic Trinkets
Buckycubes are Entertaining and Impossible to Put Down