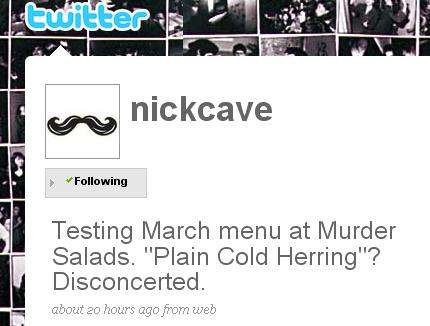 Currently there are three Kylie Minogue Twitter identities: @KylieM: “Andrew called about the Eurovision thing ... I gave him Mickey’s number for choreography.” OK, not that funny.

OR fake Nick Cave - @nickcave: “Working on a jingle for a Meow Mix commercial. ‘I felt you coming, cat, as you drew near… I knew you’d find me, cos I feed you here’.” *grin*