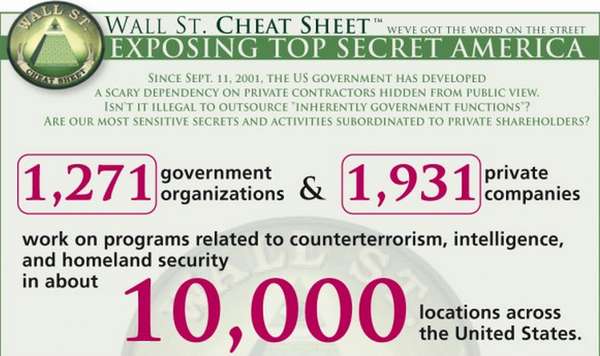 Jennifer Gosnell — July 20, 2012 — World
References: visual.ly
Share on Facebook Share on Twitter Share on LinkedIn Share on Pinterest
The ‘Exposing Top Secret America’ infographic takes a look at where America has amped up security to fight terrorism efforts and enhance security. Counter terrorism in the United States is not only a key policy, but huge business. With over 1,931 private companies (on top of the 1,271 actual government organizations) fighting for security, surveillance and intelligence, counter terrorism makes up a large portion of employment in the United States.

What might be surprising is that private firms actually greatly outnumber government agencies in locations and branch bases. With a huge collection located in the east of the United States, there are major headquarters located in almost every state. The interesting infographic also gives you the lowdown on the abbreviated terms that you may have heard, but possibly didn’t quite compute.