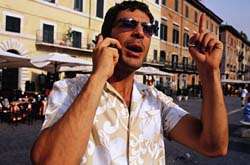 Almost 1 in 5 Rely on Mobiles

"The study showed that the number of households relying only on a mobile telephone tended to be higher in EU newcomers from central and eastern Europe -- 42 percent in the Czech Republic, compared with 11 percent in Germany," Reuters said.

In Nokia's homeland of Finland, 46% of households have disconnected their landlines entirely, while in Sweden, the home of Ericsson, ZERO per cent relied solely on cellphones.

"Luxembourg had the highest number of mobile subscriptions per 100 people -- 158, followed by Lithuania with 127 and Italy with 122."

These days, everyone has a mobile phone, the majority of people using their landlines for business or to make long-distance calls. However, with the rise of free online calling services like Skype. When's the last time you received a call at home that wasn't from a pesky telemarketer? Dropping the land line and making the permanent switch to cell phones will likely sweep over the rest of the developed world soon.
1.7
Score
Popularity
Activity
Freshness
Attend Future Festival Virtual