From Cartoon to Reality 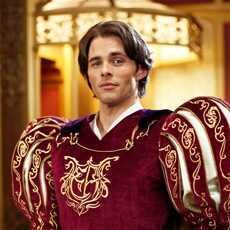 A prince walking around Manhattan? You bet, and it happened just last week. The film follows the charming Prince Edward, played by James Marsden, as he frolics in puffed sleeves from the enchanted worlds of animation (think Sleeping Beauty, Snow White, Cinderella) to modern day Manhattan.

"Our princess is stumbling around the streets of New York, trying to get back to her fairy-tale land," Marsden said in a Disney interview. "I play the prince who she was going to marry, and I go into the real world... to find her and bring her back."

What does he feel of his role? "I never saw myself as fitting the description of a fairy-tale prince, but Disney did," he said, adding, "I have a two-year-old daughter and a six-year-old son, both of whom have seen the classic Disney movies, so it's an honor to be the real-life form of one of those characters!"

Shame, the prince is taken! He'll still be fun to watch, but in his real life form and in cartoon. Marsden said the animators did an amazing job.n

"Those guys are such geniuses that you just sit back and let them do their thing," he explains. "All I did was lend my voice to the animation, which was just a few hours of work before they began animating. Beyond that, I guess they had photos of me in the prince suit and the animators were creating this character to look like an animated version of me. I prefer the way I look in the animation to the way I look in real life! They really did it right."