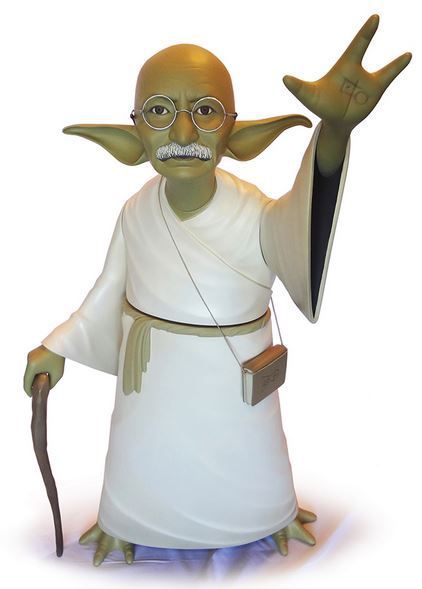 Meghan Young — December 5, 2013 — Pop Culture
References: intuitionkitchenproductions & neatorama
Share on Facebook Share on Twitter Share on LinkedIn Share on Pinterest
Empire Peaks by Mike Leavitt, an artist hailing from Seattle, Washington, is his latest action figure series. This time, instead of tackling one theme such as his Art Army and Jeremy Lin action figure did, this series tackles two: Star Wars and pop culture leaders. From a mashup between Steve Jobs and C-3PO to Charles Darwin and Chewbacca as well as Wicket Wystri Warrick and Michael Jackson, the combinations are hilarious.

Debuted at the Jonathan LeVine Gallery, the figurines making up the Empire Peaks by Mike Leavitt are all carved out of wood and stand between 1.5 to 3 feet tall. According to the artist, "'Empire Peaks' are meant to reduce modern dynasties to a sci-fi soap opera of objects." That is a serious message for such a comical collection.
2.6
Score
Popularity
Activity
Freshness
View Innovation Webinars