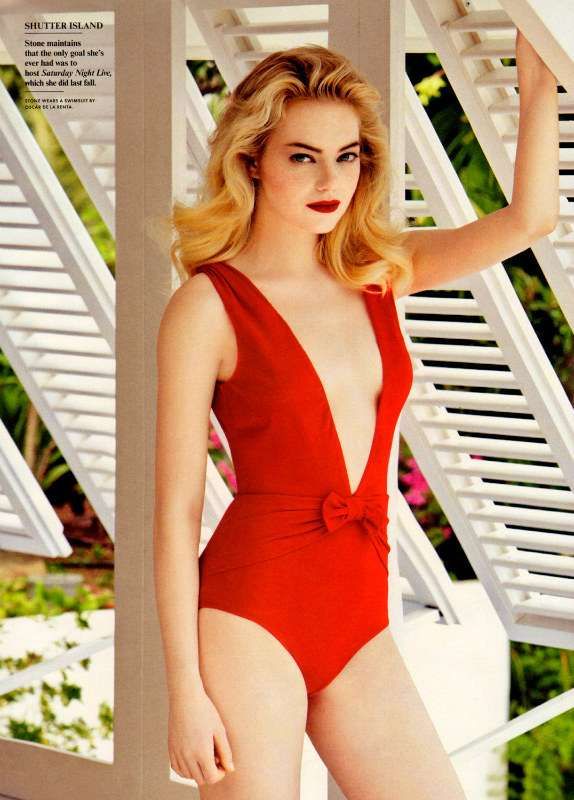 Jordan Sowunmi — July 9, 2011 — Fashion
References: vanityfair_ & zac-fashion
Share on Facebook Share on Twitter Share on LinkedIn Share on Pinterest
The Emma Stone Vanity Fair August 2011 six page editorial is simply another marker in a young career characterized by a string of connected milestones indicating that Emma Stone is on the precipice of being launched to the top of the film industry as one of Hollywood's most successful and talented actresses.

The Emma Stone Vanity Fair August 2011 editorial was shot by respected French fashion photographer Patrick Demarchelier, who captures the newly minted blonde gazing at the camera in a stunning, red-hot, one-piece bathing suit that reminds longtime Stone fans of how good she looks in and around the color red.

This next year will undoubtedly be the biggest of Stone's already accomplished career. This coming August, Stone is set to star in 'The Help' the Touchstone Pictures adaptation of Kathryn Stockett's best selling novel set in 1960's Mississippi. Then next summer, Stone will be apart of another major Hollywood production when she stars as Gwen Stacy in 'The Amazing Spider-Man,' Columbia Pictures' reboot of the popular Spider-man franchise.
3.8
Score
Popularity
Activity
Freshness
Get Trend Hunter Dashboard