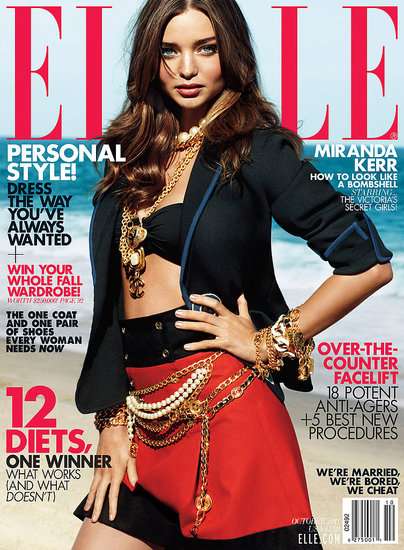 Souzan Michael — September 9, 2011 — Pop Culture
References: fashion-style.becomegorgeous & fashionologie
Share on Facebook Share on Twitter Share on LinkedIn Share on Pinterest
Elle US magazine has not featured models on its cover in over eight years, until now that is, and of course they couldn't pick just one, so the Elle October 2011 features four different models. What's more is that they didn't place just any four models on the cover, Elle hand picked some of the Victoria's Secret Angels and gave them each their own cover.

The four editions of Elle October 2011 feature Miranda Kerr, Chanel Iman, Doutzen Kroes, and my personal favorite angel, Adriana Lima. "We felt it was time to show the sexy side of fashion again," says editor Robbie Myers. "These covers harken to what made Elle Elle: Shot outside, drenched in sunlight, color, and of course accessories, the women look right back at you with all the personal and sexual confidence in the world."

Styled by Joe Zee, the girls look flawless as usual. The last model to cover Elle magazine was Erin Wasson on the September 2003 issue. Judging by these covers, I think Elle would be wise to stick to models for a while.
3.4
Score
Popularity
Activity
Freshness
Get Trend Hunter Dashboard