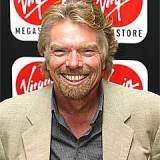 Jeremy Gutsche — September 14, 2006 — Pop Culture
References: powerwithin
Share on Facebook Share on Twitter Share on LinkedIn Share on Pinterest
I had the pleasure of attending lunch with Richard Branson today. Very cool. This was inspiring because I share his love for entrepreneurialism and adventure. In many ways he is an inspiration to Trend Hunter - as he is to many other companies around the globe. This man has started a record label, airline, train network, mobile phone company, banking empire, and now, Virgin Galactic, the world's first commercial space enterprise.

For context, I was a VIP guest at the Power Within conference in Toronto. The conference included 5,000 other executives, but the VIP lunch was a smaller group. In fact, Sir Richard Branson sat at my table. Unfortunately, his visit to my table was only for a minute. He spend most of his lunch at the table next to me. However, it seemed larger than life to sit next to the Rebel Billionaire (Which is interesting because I was also next to Disney's Michael Eisner and Canada's almost-Prime-Minister, Belinda Stronach).

During the conference, I had a chance to ask Richard how he finds his new ideas. Specifically, I asked him how he decided to enter Virgin Galactic and how he decides upon his most entrepreneurial ventures.

Richard replied that his big ideas often represented long term aspirations. For example, he had always aspired to go into space, but felt the goal could never be attainable to a normal citizen. When the opportunity presented itself, he knew that he had to take advantage of it. In other words, he didn't figure out that space travel was an optimal investment. Rather, it was something he always wanted to do, and when it became possible, he pulled the trigger.

Sir Richard Branson's advice was to pursue your dreams and invest in ventures that you find exciting. Branson also noted that you DO need to make sure that the ideas solid, and that it is important to think about the impact of new investments on your full company and brand. However, at the end of the day, the most important factor is that you need to be passionate about your venture.

The Power Within conference also included speeches from Disney's Michael Eisner, Magna International's Belinda Stronach, Motivational Speaker Les Brown, Author Tim Sanders, World Saver John Woods and Commedian Jessica Holmes. The overwhelming theme was that you have to throw yourself into your passions.

If you want something great, pull the trigger and stop enjoying your complacency. Higher risk equals higher reward and you have the power to become something extraordinary.

More about Sir Richard Branson:
Richard Branson was born in 1950, and educated at Stowe School, where he established a national magazine called Student at the age of sixteen. He started a Student Advisory Centre at age 17 to help young people. In 1970 he founded Virgin as a mail order record retailer and shortly thereafter opened a record shop in Oxford Street, London. During 1972 a recording studio was built in Oxfordshire where the first Virgin artist, Mike Oldfield, recorded "Tubular Bells" which was released in 1973. The first album of the newly created Virgin Records went on to sell over 5 million copies and over the years many household names, including, Belinda Carlisle, Genesis, Phil Collins, Janet Jackson and The Rolling Stones helped make Virgin Music one of the top six record companies in the world. The equity of Virgin Music Group - record labels, music publishing, and recording studios was sold to THORN EMI in 1992 in a US$1Bn deal. The interests of Virgin Group have now expanded into international "Megastore" music retailing, air travel, mobile, financial, retail, music, internet, drinks, rail, resorts and leisure, through around 200 companies in over 30 countries. In December 1999 Richard Branson was awarded a knighthood in the Queen's millennium New Years honours list for "services to entrepreneurship".